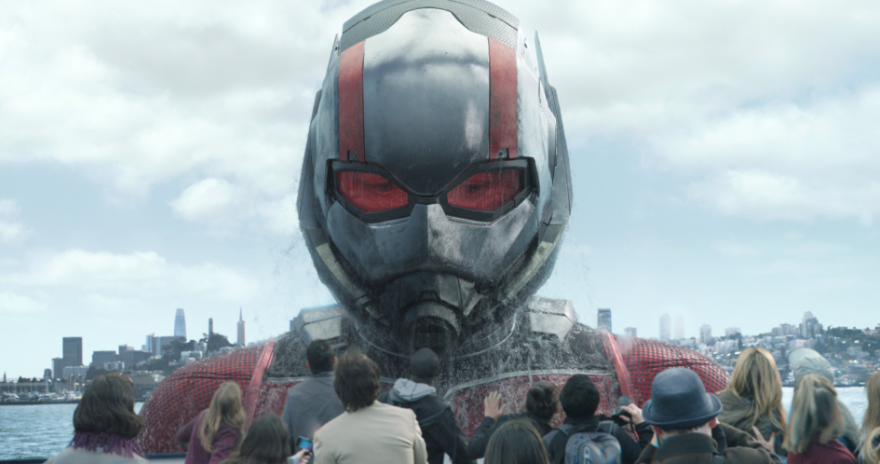 We should cheer as if he’s the man of steel, really more than steel!  To see why, we become cubists, of a kind.  In particular, consider the following cube.

Suppose you double its size, meaning its length, width and height all double.  Then the cube becomes: Suppose you decided to paint the cube and it took one bottle.  Then, it would take four to paint the enlarged cube.  However, what if we fill the original cube with one cup of water. The larger cube would take eight cups.

What does this mean for Ant-Man?  From my quick estimate, Ant-Man is approximately 10 times bigger as he peers down at the deck of the ship.  Therefore, he weights 1,000 times as much.

The problem? Ant-Man’s bones scale relative to the rate at which the cross-section of his bones scales, which is only 100.  Ant-Man should be crushed under his own weight.  He isn’t and, as such, mathematics gives us another superhero power to cheer as we watch the movie!

Adapted from course notes entitled “A Tour of Mathematics – Exploring the Borders” by Dr. Tim Pennings

While my title indicates I’m a professor of Mathematics and Computer Science, it’s important (and will become clear as you read through these pages and posts) that I’m also an artist.  I’ve trained in mime and puppetry and performed internationally in both.  As such, you’ll see posts involving my art and math – together or separately.

Mathematically, I specialize in sports analytics having worked with teams in the NBA, NFL, and NASCAR. I’ve also fielded analytics questions from national media such as the New York Times, ESPN, and the Wall Street Journal.  I also direct and work with a team of student researchers (70 in total in the 2017-18 academic year) to provide analytics to Davidson College sports teams.

So, search around and feel free to connect as I’m easy to find on the Internet.